Tokenised Securities in APAC - A State of Play

A combination of factors has driven the emergence of China as a global player on the world economic stage and the time is finally ripe for the Chinese currency, the renminbi (RMB), to take its place among the leading currencies of the world.

While the global financial crisis of 2008 served as a clear tipping point for China’s rise to prominence, stresses arising from continued fiscal, current account and debt woes in the US, the economic crisis at the Eurozone periphery and the long-term stagnation of Japan (coupled with its massive public sector debt build-up) have all served to highlight the woes of the world’s traditional reserve currencies: the USD, EUR, JPY and GBP.

At the same time, China’s rising global power in the early years of the 21st century has become increasingly evident, much as the US displaced the UK as the world’s leading economic power in the early 20th century. The growth of a multipolar world has led to an international re-evaluation of the USD’s role as the world’s dominant reserve currency – paving the way for the possible adoption of the RMB as a global alternative.

The seeds of China’s dramatic rise were sown in 1978 when the late Deng Xiaoping put the country on a path of economic reform and modernization. This followed nearly three decades of a closed and domestically focused economy after the founding of the People’s Republic of China (PRC) in 1949. Since the introduction of Deng’s reforms, China’s rapid growth and its rise as a manufacturing powerhouse have seen the nation make spectacular strides in the following respects:

China is by any measure a global economic power. However, the country’s economic might is not matched, as yet, by the RMB’s role in global trade and investment. A relatively closed capital account and under-developed domestic capital market (accompanied, however, by gradual current account liberalization), coupled with growth in the use of RMB in trade settleme”ts (which has been rapid, at 18% of total China trade volume, but still below its developed country peers), has meant that RMB recognition and usage internationally is only now gtraction.

Gradual onshore and offshore participation in the RMB markets by global central banks and investors through the use of swap lines, the Qualified Foreign Institutional Investor (QFII) and RMB Qualified Foreign Institutional Investor (RQFII) programs, the rapidly growing offshore RMB bond3 markets and the rise of offshore RMB centers – Hong Kong being the largest – have contributed to the first phase of the RMB’s internationalization, but there is a long way to go.

1. According to data compiled by the International Comparison Programme hosted by the World Bank, as reported by the Financial Times.
2. Source: US Energy Information Administration.

ASIFMA is a member of the GFMA alliance 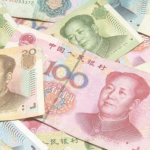